My buddy, Hans Scharler, created a kick-arse Steampunk Pumpkin. It uses the ioBridge, this neat gadget that he helped create. It lets folks easily control just about anything via the Web. Ha, he even had his toaster tweeting via the ioBridge.

My musical tastes are pretty much stuck in the nineth grade.  I can't stop listening to "Warriors of Time"

by Black Tide.  It's not surprising that a D&D fan like myself would dig a song about warriors fighting throughout time.

Here is the great video which features their mascot, "The Bastard" (YouTube won't let me embed this one):
http://www.youtube.com/watch?v=ibhVM7zeRgQ 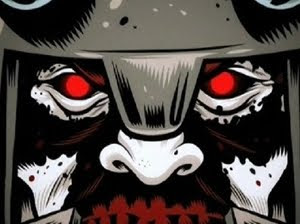 Unfortunately, they cut the excellent intro for that video, so here is the song in its entirety:

No comments:
Email ThisBlogThis!Share to TwitterShare to FacebookShare to Pinterest
Labels: music

Inspired by a recent Penny Arcade strip here, I thought I'd post my favorite D&D trap.

It's from "A3: Assault on the Aerie of the Slave Lords."

Cunning Gelatinous Cubes
"As soon as the first rank of the party walks onto the 10 foot x 20 foot area (marked by the dotted lines) a 1-foot-thick slab of stone tilts, spilling them into a pit on top of a gelatinous cube. Characters in the second rank must save vs. Paralyzation to avoid falling into the pit. [Frost - Note: only the *second* rank gets to make a save.] Every round, a character who is in contact with the cube will take 2-8 points of damage and must save vs. Paralyzation or become paralyzed for 5-20 rounds. In addition, once per round the cube will extend a pseudopod and strike an opponent up to 15 feet away. The pit is 10 feet wide, 20 feet long, and 5 feet deep. The cube has altered its shape to fits this area." 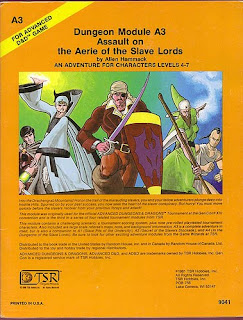 To make matters worse, there is a second cube in the room that sneaks up on the party while they deal with the first. Glorious.

When I DMed that module back in high school, I do recall it messed up the party's monk pretty badly, but I don't think anyone died. I think it's the evil simplicity of it that appeals to me. Well, that and it involves gelatinous cubes (and cunning ones at that).
2 comments:
Email ThisBlogThis!Share to TwitterShare to FacebookShare to Pinterest
Labels: 1st edition, DM Aid, Dungeons and Dragons, RPG, trap

I have been frequenting online message boards for years.

These are the ones I haunt the most in order of frequency:

Since the onset of 4e and the resulting dry up of 3.5 support, I grew more interested in Castles & Crusades and, as such, found a new home at the TLG forums. A real nice group of people posts here regularly. It's a small community, but a loyal one. C&C is obviously the focus, but they talk about gaming in general.

Most of my 3rd edition D&D experience has revolved around Necromancer Games products, particularly Rappan Athuk

which was been my main source of campaign material for years. The forums aren't very active these days and most of the original crowd has moved on. However, with the recent release of a few back-logged 3.5 products, there has been more activity there as of late. It's nice to see Bill Webb posting again. He is the main author on most of my favorite NG products.

ENWorld.org
ENWorld is a great place to get general RPG news. The forums are extensive and, by and large, civil. I don't post there too much as the majority of the subjects never grab me. Perhaps it's because I'm 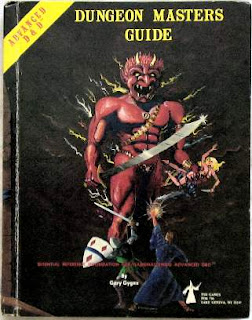 To say I have not been very prolific with this blog is the understatement of the year. Well, like the blog title states, I’m a dad and a busy one with two little girls, not to mention work, etc. I have resolved to get this thing up and running, though, so here it goes.
Let me explain a bit about myself. I have been playing Dungeons & Dragons since I was eight. My older brother taught me the rules back in the day and I’ve been in love with the game ever since. I cut my teeth on Advanced Dungeons & Dragons because it’s the rule set my brother was using at the time. I later found his basic set rules (with the Erol Otus covers) and I recall a friend having the red box, but I never made much use of those rules. To me, AD&D was D&D. I stuck with AD&D 1st edition for quite some time, stubbornly refusing to move to AD&D 2nd edition when it came out. I did later switch to AD&D 2e when I realized that the rules weren’t a hell of a lot different than 1e. Hell, THACO seemed like a damn revolution (although, funny enough, it actually first appeared in the 1st edition Dungeon Master Guide). My gaming group regularly used 1e and 2e materials interchangeably and I DMed tons of 1e modules. Ha, it was an interesting surprise to me, and my players I’m sure, when I started DMing “Against the Giants” without realizing giants had received 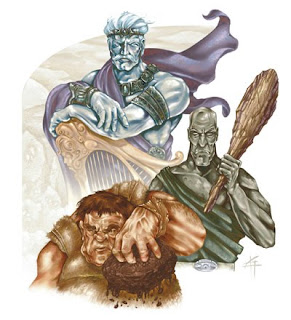 some steroids between 1e and 2e.
I jumped into 3rd edition as soon as it came out. That version of D&D really got me excited about D&D again. I felt that it brought back much of the great flavor that had been ripped out of 2e in TSR’s rush for political correctness. We had our half-orcs and assassins back! One could even use the words “demon” and “devil” again! Gasp! I was a bit miffed when 3.5 came out because I felt deceived. The gaming community was told it was simply a patch to the old system, sort of like a cleaned up printing of the 3e rules. Well, that wasn’t the case. Yes, one could use 3e materials in a 3.5 game without much difficulty, but the same could be said of 1e materials in a 2e game. I just wish Wizards of the Coast had been upfront and called 3.5 what it really is: the 4th edition of the game.

As for the official 4th edition of D&D (which I see as the 5th edition, really), I have no interest in it. I could go on and on about it, but the simple fact is that it’s not the game for me. I actually wouldn’t mind trying it as a player, but I don’t have the time or desire to learn new rules, especially those that were declared incompatible with my older materials.
While I play D&D 3.5, my favorite system is Castles & Crusades by Troll Lord Games. It is a version of D&D best seen as a simple, rules-light version of D&D 3.5. I’ll explain why I love C&C in another post.
For whatever reason, I never have much interest in systems other than D&D (I see C&C as a version of D&D). I did play in a great Shadowrun campaign back in the day and I ran Gamma World from time to time, but D&D is my home system and I can’t really push myself to move beyond it. I’ll gladly play other RPGs (and would do so if I had more time), but I have no interest in GMing them (although I do have an itch to GM Gamma World again).
Well, that is enough for now. As you can see from the margins, I’m currently DMing a Rappan Athuk Reloaded