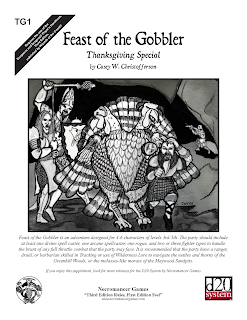 Many years ago, back in the heyday of the OGL and d20, Necromancer Games put out a free Thanksgiving Day-themed module. Yes, you read that correctly, a Turkey Day adventure! To add whip cream to this pumpkin pie, it's written by Casey Christofferson, one of my favorite gaming writers. He has had a hand in some of NG's best work, such as Bard's Gate

and the City of Brass

. These days he writes great stuff for Troll Lord Games, namely supplements for his piece-meal campaign setting, the Haunted Highlands.

Anyhow, I thought it was worth resurrecting this beast for the holiday. Behold! The Feast of the Gobbler!
No comments:
Email ThisBlogThis!Share to TwitterShare to FacebookShare to Pinterest
Labels: adventure, Casey Christofferson, Gamer Life, necromancer games, RPG, thanksgiving 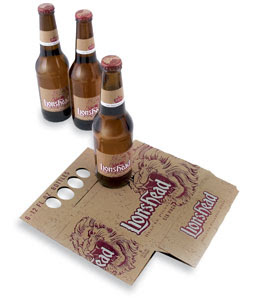 It's been kind of hectic around the ol' home front, so I'm eagerly awaiting tonight's game to blow off some steam. Nothing better than throwing down some beer and letting the dice roll as a way to end the week.

The last two sessions have been kind of lack-luster due to my DMing, but I feel back on my game, as it were, so I anticipate tonight to be a blast. The party plans on staking out an ancient necropolis near Bard's Gate

, so I worked up a pretty interesting encounter for that one. Then it's back to Rappan Athuk

As I’ve alluded to earlier, nearly all of my D&D 3.5 experience has revolved around Necromancer Games (NG) products. I have played in a few campaigns that didn’t involve NG products, but I typically DM rather than play. The only campaign I manage to play in currently makes use of NG’s Grey Citadel 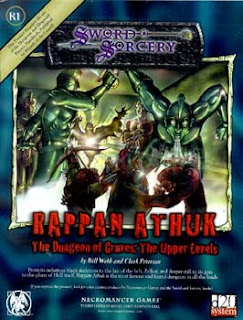 I did run the first Freeport module, Death in Freeport

(by Green Ronin), and that was great fun. However, while I was going through a rough spot in my life, my good buddy (and roommate at the time), gave me a fantastic pick me up gift: Rappan Athuk I and Rappan Athuk II

. Why did he pick these ones out? Because of the NG slogan, proudly displayed on their products: “Third Edition Rules, First Edition Feel.” My friend’s only stipulation with these gifts was that I must DM him through them. Oh, the poor fool… little did he know what he was getting into.

Rappan Athuk (RA) is known as a real meat grinder of a dungeon. Neither I nor my buddy knew that at the time though. The concepts of “level-appropriate” and “balanced” encounters hold no sway in RA. It is a dungeon for players with the testicular fortitude to watch their favorite PCs die a horrible, horrible death. Although, it was created in the vein of Gygax’s Tomb of Horrors

, I think RA surpasses that hoary module not necessarily due to lethality, but rather due to its scope. 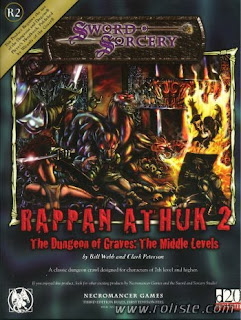 Why the hell would anyone want to play in such a campaign? Challenge and curiosity are the main motivations, I think. Every gamer worth his salt thinks he can beat the unbeatable. Plus, when a gamer hears about a dungeon with such a reputation, there is that morbid curiosity to see how tough it really is.

On a side note, I’ve seen a lot of benefits in playing a campaign as tough as this one. My players’ gaming skills have increased exponentially. It was a damn blood bath for a while, and they still have their set-backs, but damn if they don’t kick some serious tail these days. I like to think it’s because they’ve honed themselves in the fire of RA. I also believe running RA has made me a much better GM. It’s put me through the paces and I’ve had to run some very tough encounters and make some very tough calls. I’ve learned a lot.

My current campaign is my second attempt at running RA. I ran my first RA campaign in 2003-2004, shortly after getting the modules. This campaign was fun, but I lost focus. I’ll explain that campaign another time, but suffice it to say, it became more than an RA campaign. That campaign ended when I moved out of state for a job.

The start of the current RA campaign coincided with two things: 1.) my moving back to the Pittsburgh area and 2.) the release of Rappan Athuk Reloaded (RARE)

. This boxed set contains all the original materials, updated to D&D 3.5, plus additional material (some of it brand-spanking new, some of it having been formerly available as Web support downloads). 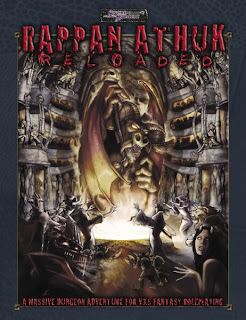 Once back in da Burgh, I rallied up the gaming troops and sent out this introduction:

“Certainty of death, small chance of success…. What are we waiting for?”

Let me take you back to ancient times. I was but a boy of 8 or so and my brother brought home this strange book with monsters on the cover… a red dragon in the air, a troll lurking underground, and something called a “roper“ flailing about its tentacles. Thereafter, every once and in a while, my brother would come home from the local drugstore with a new module. He’d “make some guys” for me and we dive into this new world of adventure, full of underground perils, new monsters, and magical loot. There was something almost magical about it.

Well, folks, I had that feeling again today: my order of "Rappan Athuk - Reloaded"

I invite you all to roll some dice, slay some monsters, lose some hit points, and have some fun.

Ok, enough of the holding hands and far away looks… cue the music…

Let the blood bath begin. This is going to be as straight forward as they come. A straight up, beer and pretzels dungeon crawl. Over-arching plot line? Not here. Quest to save the world? Not here. What’s the plan? No, not nuke ‘em from orbit (you wish), the plan is: Enter the dungeon, kill and loot as much as you can, retreat to the city to heal (i.e., raise the dead), count your money, repeat. That is it. It’s you versus the dungeon.

There will be no house rules and no big campaign setting. There will be a city of some kind where the party will be able to restock and rest. All resources (within reason) will be available. For example, there will be a priest high enough level to raise your PCs (for a price), healing potions can be readily bought, supplies for crafting magic items will be available, henchmen to hire, etc. Rappan Athuk is hard enough without added difficulties, so we will be playing this stuff by the book.

Folks, this is Rappan Athuk. You know what you’re getting into. I think the dungeon is freakin’ great, but, as you know from experience, it’s tough as hell. If you sign up to play, please go in knowing that the body count on this is going to be high. On the other hand, when you kick arse, you know you *really* kicked arse.

The party will consist of 6th level PCs created by the point buy system (the highest allowed by the DMG) with equipment (including magic items) bought as per the DMG guidelines. In all seriousness, I’d advise you create a few characters (if one dies mid-session, I will work in your backup ASAP). Does anyone know of a good PC generator that allows for point-buy?

If you’d like to play, please let me know what time and days are good for you. Then we’ll figure out a schedule. If you can’t play regularly, you are still welcome to attend whenever you want. Your PC will be there only when you are there to play him.

Let me know if you have any questions.
No comments:
Email ThisBlogThis!Share to TwitterShare to FacebookShare to Pinterest
Labels: 3.5 edition, 3rd edition, adventure, campaign, Dungeons and Dragons, necromancer games, rappan athuk, RPG

At his blog, Under Siege, Pat Bellavance (a.k.a. Moriarty777) posted this great explanation of the Castles & Crusades SIEGE Engine mechanic. This is a great explanation, so I decided to share: "What is this 'SIEGE Engine' anyway?"
No comments:
Email ThisBlogThis!Share to TwitterShare to FacebookShare to Pinterest
Labels: Castles and Crusades, Old School, OSR, pat bellavance, RPG, SIEGE Engine
Newer Posts Older Posts Home
Subscribe to: Posts (Atom)