As noted at Under Siege, yours truly has won a "major award." The Castles & Crusades Society held a contest quite some time ago at their, now defunct, forums. The contest required participants to post a short description of just about anything that could be useful in a campaign world. For example, you could post a write-up of a character, a magic artifact, etc. After you made your post, you provided the title for the next poster. In my case, the previous poster had provided the name "Manistus the Scrivener." After I posted my description, I suggested "The Dark Horse of Winter."

pear in the winter sky every few years and was seen as an incredibly bad omen.

Anyhow, my "Manistus the Scrivener" was good enough for sixth place, so that earned me a copy of The Ruins of Ramat, an adventure module that I've heard good things about. Unfortunately, I didn't save a copy of that write up anywhere and I have to wait until the next The DomesdayBook web-zine publishes to read it. I'll be damned if I can remember what I wrote.
No comments:
Email ThisBlogThis!Share to TwitterShare to FacebookShare to Pinterest
Labels: adventure, award, Castles and Crusades Society, contest, Gamer Life, RPG 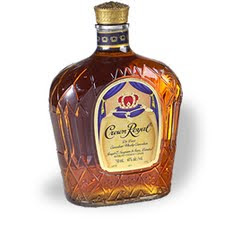 So, as the title states, I have a bit of a buzz going on. Not so strong that I can't insert a pic or a link or two, but, well, yeah. We consumed a good bit of alcohol at tonight's game. Good ol' Sam brought some Crown Royal (the bag naturally already being used as his dice bag) and Dave White brought some high-octane Belgium beer. 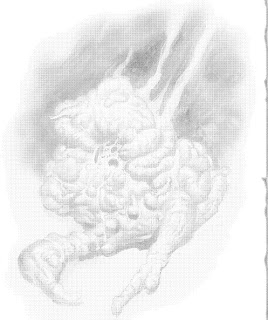 So another great session tonight. The group headed back to Rappan Athuk

after a bit of restocking and spell scribing in Bard's Gate

. They described to restart from square one (i.e., dungeon level 1) and that allowed me to bring back some of the RA classics, including the Dung Monster and the Green Gargoyles. They also headed to the Red Jester (from Tome of Horrors II

), which I use as a substitute for Sacarcek on level 2. That allowed for some great role-playing and lots of laughs.

Anyhow, no real point to this post other than I have a blast gaming. It bothers me that other folks look down on it. They don't realize what they're missing. It's not the game so much as the fun you get from sharing laughs and dice over a table week after week. It's like a poker night, but unlike the poker night, the group is working together. There is camaraderie (thank you spell check for that one).

Any way, damn I like me some D&D.
No comments:
Email ThisBlogThis!Share to TwitterShare to FacebookShare to Pinterest
Labels: camaraderie, campaign, Dave the Knave, Dungeons and Dragons, Gamer Life, RPG, Sam
Newer Posts Older Posts Home
Subscribe to: Posts (Atom)