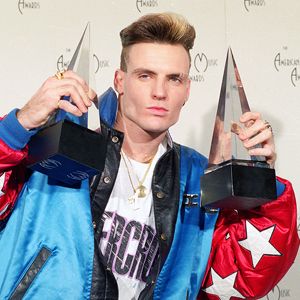 Ok, this is pretty good. Thanks to Dave "the Knave" for this one: Dice Dice Baby by MC 117.
No comments:
Email ThisBlogThis!Share to TwitterShare to FacebookShare to Pinterest
Labels: Dave the Knave, Gamer Life, music, RPG

There has been a lot of post-apocalyptic game talk recently, so this tracked seems very appropriate.   It also makes me think of Beyond the Black Gate's raven lance.

Oh, and if you want some "real" post-apocalyptic action, check out this three-day Mad Max reenactment (is it a reenactment if you're enacting something that hasn't happened yet?).

Official Internet Meme of the OSR

So given the reactions to my post yesterday, I think we have found the official Internet meme of the OSR.  Please use it as you see fit.

Disclaimer: I did not create this picture.  I first encountered it on Fark.com and did a Google image search for it yesterday as it seemed appropriate. 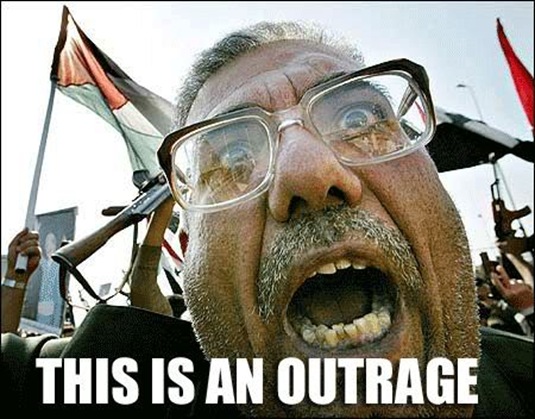 Ok, so first off, I'm a hardcore Necromancer Games fanboy.  Without a doubt, they have 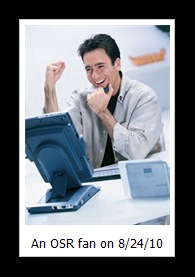 made some of my favorite RPG products.  So when Bill Webb (a.k.a. Tsathogga), an NG co-founder, announced its resurrection as Frog God Games, I was stoked.  I still am.  Bill had been more of the silent partner at NG (Clark Peterson, a.k.a. Orcus, being the more vocal spokesman), so it was interesting to see Bill grab the wheel.

Recently, FGG made some big news by announcing they'd be producing a new edition of OSR favorite, Swords & Wizardry. The OSR community rejoiced.

Then folks found some interesting text on FGG's About Us page and there has not been much rejoicing.  I have put the entire text so you, Gentle Reader, can see the whole context. I have underlined the shit-storm causing text, though:
----
"Who We Are

We consist of old grognard gamers, including a brilliant layout guy, and a cartographer who was not even a gamer when we recruited him. We have more than a few writing credits to our name, and have decided after dealing with publishers, printers and middlemen to head off on our own and make some books. We have developed friendships with, and worked with the best and most famous writers in the industry. We are the real deal. 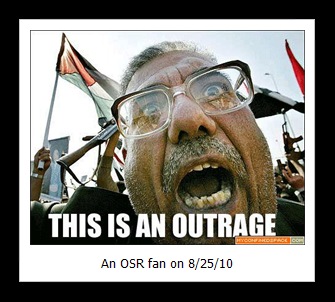 We are not the guys who are going to offer bargain basement junk for a quick buck. We won't sell you hand drawn maps and clip art laid out by amateurs and posted up on Lulu.com as a cheap book that you look at and discard.

We won't fill your players coffers with millions of gold pieces and powerful magic items either, at least not without great efforts. Our encounters won't be "balanced" to make sure no one dies, and a 3rd level monster may or may not have 50.2 gp (like its supposed to in certain rule books). Death will be frequent, but fair, and players who fail to use their heads will surely lose them.

After all, Tsathogga's special attack is "eats 1d6 adventurers per round". Adventurers taste like chicken....errrr, flies."
---

That text has been on the FGG site from day one. I know that because I read it then and thought it was odd. No one took notice in the OSR-o-sphere until the recent FGG/S&W announcement (understandably so, since FGG had only talked about Pathfinder products up to that point).

So what do I think of this? That text had me scratching my head when I first read it and does so now.  Bill Webb has stated on the NG forums that he plays 0e D&D via Swords & Wizardry (available, uhm, on Lulu: link). He has stated he has committed to articles for Knockspell, a well-known OSR magazine.

I think the words were very poorly chosen, to say the least.  But Bill seems to have inadvertently lumped in the very game he plays.  That tells me this isn't simply "the OSR was crap until now!"  It will be interesting to hear his explanation. I get why fans are upset, but I want to hear his response. 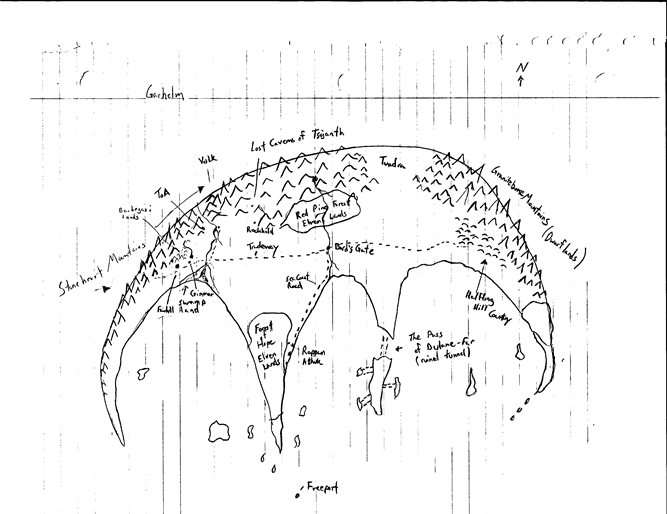 If you want a better look, trying downloading the PDF: link

Yep, as you can tell from the scan, I banged it out on some old notebook paper.  I make no claims to be a cartographer, so I have no clue if such a landmass is even feasible.  I think it looks pretty cool, though, so I don't really care.  There is no scale as I wasn't really sure what I wanted it to be and figured I'd tackle that as needed.  I just wanted a rough idea of the campaign world so I could place important locations, namely cities and dungeons.  You'll note names from the standard Necromancer Games (NG) heavy hitters (the Stoneheart Mountains from Tomb of Abysthor, Fairhill from the Crucible of Freya, Bard's Gate, the Vault of Larin Karr, and, of course, Rappan Athuk) as well as The Lost Caverns of Tsojcanth coming out of retirement. Yep, that is Green Ronin's Freeport way to the south.

I had big plans for the campaign, but they weren't realized after the deaths in the Vault of Larin Karr.  My general plan was for a sandbox campaign once the party had finished up there. I planned to include a world map with the loot at some point and then let the players have at it. Since I had never shown the map before, I was hoping that would be kind of a neat surprise (i.e., the idea being that few people in Garhelm have much sense of what their world actually looked like).

I started the face-to-face campaign in Fairhill, which is the setting of NG's The Crucible of Freya.  I don't own that module (although I did play it as a player under Sam's DMing), but I used the free maps from NG's site [link (you’ll need to scroll down a bit)] and added my own NPCs and descriptions.  That worked out quite well and allowed me to impart the flavor of Garhelm right from the start.  I might write those up if I have a chance (unfortunately, I don't have those as electronic files, so no easy cutting and pasting).  I don't think I used Fairhill for the online campaign, likely because Sam was playing as a character.

Anyhow, here is a key of sorts to help you decipher things (I left off anything I thought was self-explanatory): 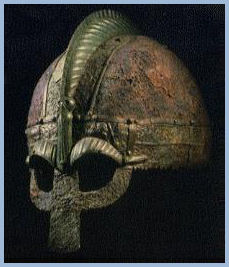 So, there you have it.  Garhlem.  Some time in the future, I’ll put up my version of Fairhill and perhaps some of the home brew adventures I had for this campaign.
2 comments:
Email ThisBlogThis!Share to TwitterShare to FacebookShare to Pinterest
Labels: 3.5 edition, 3rd edition, campaign setting, DM Aid, Dungeon Mastery, Dungeons and Dragons, Garhlem, home brew, necromancer games, rappan athuk, RPG, Sam

I know I already made a post today, but this song is too great not to share.

Garhelm - The Blood of the Einherjar 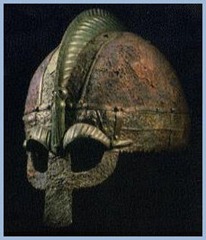 I had hoped that allowing any race to freely multi-class with Barbarian would encourage hearty PCs (see the "Classes" section of this post link).  However, it pushed players to take a level of Barbarian at first level, whether they really wanted it or not.  Besides perhaps ending up with a party solely composed of Barbarians (which seems bad-ass to me, actually), it also meant that if a player took Barbarian at first level simply to have a beefy hit point base (mmm… beefy), he’d miss out on the initial first level perks of the actual desired class (e.g., Wizard, Rogue, etc.).  On the other hand, if he didn’t take the Barbarian class at first level, the rule sort of punished him by not giving him that nice 12 hit point base.

This didn’t occur to me until a player voiced his frustration after a TPK.  So I created “The Blood of the Einherjar” rule.  Unfortunately, player interest was completely nil at that point (can’t say I blame them), so this rule was never really enacted or tested because the campaign had dissolved.

The Blood of the Einherjar 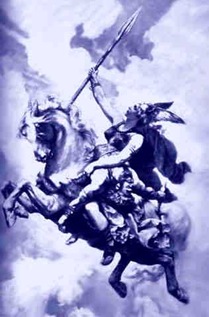 The Einherjar are the heroes who have died with great bravery on the battle fields and have been taken by the Valkyries to Valhalla. When Valhalla emptied to purge Garhelm of the Demons and Devils, Odin and Thor led the Einherjar into battle. Some of these warriors found companionship with the natives of Garhelm during this time. Although the Einherjar departed once Garhelm was cleansed, their children remain. These lucky few have the blood of the Einherjar flowing through their veins. These fortunate ones are destined for great deeds. They are the heroes of the Third Age.

What does this mean in game terms? This means that any PC, whether he knows it or not, has the blood of the Einherjar coursing through him. As such, he is born for battle. All PCs, in effect, start off at 2nd level, but in a particular fashion. Every PC begins with a complimentary Barbarian level to implement as he wishes. In practice this means you can use the Barbarian level as your first level or as your second. This will mainly be determined by what you actually want to play. If you plan to play a Wizard, you would most likely take your first level in Wizard to make the most of the skill points and such, and then add on the Barbarian level afterwards. However, regardless of which class is technically your first class, you will start with 12 HP + Con bonus. For example, if you decide to play a Wizard, you will begin with 12 HP + Con bonus + 1d4 HP + Con bonus. The second HD will be rolled as normal (i.e., with the DM present). [As cool as I think it would be to have an entire party with the Rage ability, if I revive Garhelm, I will give the players the option of selecting a level of Fighter or Barbarian (and they’d get the standard Fighter 10 HP + Con bonus instead of the Barbarian's 12 HP + Con bonus to start). This fits the theme and purpose just as well and gives a bit more variety to the concept.] 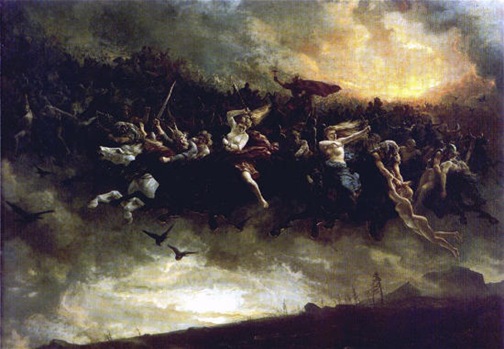 I’ve been digging through my old files (both paper and electronic) and have realized at some point I revised my initial rule-set.  Both of the Garhelm campaigns were played over four years ago (egad, time flies), so I’m not certain when certain rules were in effect.  I am fairly certain those in my first rules post were used consistently.  I’m not sure about the following ones, unless otherwise noted below.  In any event, here are a few more rules, again with annotation.

Raise Dead [I had two versions of this rule, both are included below.]
PC Death
Dice Rolling
Action Points (from the d20 Modern SRD)

One Gamer, a Million T-Shirts 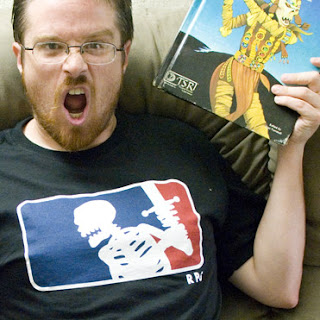 Ok, may be not literally a million, but my buddy Dave "The Knave" has a shit load.   He is posting a picture of himself in a different t-shirt from his collection each day. Check out his "Too Many T-Shirts" project: link (he also has a Flickr account for it: link). Take a gander...
1 comment:
Email ThisBlogThis!Share to TwitterShare to FacebookShare to Pinterest
Labels: Dave the Knave, Gamer Life, RPG

My father-in-law passed away this week and I'm not much in the mood for posting.  I will return to my Garhelm stuff when the mood strikes me.