Justification for a Running a Hard-Ass Game

One of my players recently paid me this compliment:

"When I talk with my other gaming friends,  I'm constantly surprised at how... well... candy-ass their games are.  Honest to God, I have no interest playing a winged, 27th level paladin and killing 300 orcs."

I must be doing something right.

Troll Lord Games Has Sales Pretty Much Every Damn Day

Okay, so I probably come across as a corporate shill for Troll Lord Games, but I'm not. I'm simply a fan of two things:

I like to share these deals with everyone in case they share either of those two qualities.  But here is the problem, TLG is having deals left and right these days.  As such, this will be my final "TLG sale!" post unless they have something truly exceptional.

One particular great deal they have going now is a Castles & Crusades PDF Starter Bundle for $29.55 that has:

The Skull Survival Trophy Passes Hands... Twice in One Night. 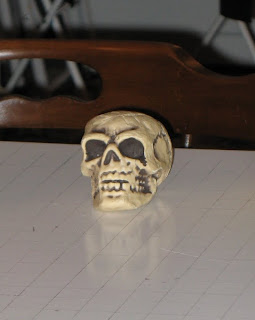 As I mentioned in my last post, our last session was particularly deadly.  Three characters dropped, two of which had been around for almost the entirety of the campaign.

My group has a tradition: the player whose character has been around the longest gets to possess the Skull.  Sam originally inherited the Skull way back at the start of the campaign when we had a TPK. Well, a near TPK. Sam missed that evening and his PC survived by default (our house rule is if you're not there, neither is your PC).  Ipso facto, he got the Skull.  When Sam's paladin was brought down by spectres in another near TPK, Grim Jim and his ranger, Jocelyn Dawnseeker, inherited the Skull.  Dave the Knave was next in line and has been jonsesing for it for years now.

Well, although Dave's rogue/monk, Plum Blossom (illustrated here: link), was brought to negative HP during the battle with iron golems, she didn't actually die.  She lay incapacitated on the battle field.  Jim's ranger, however, suffered too many full attacks at the hands of said golems and when he dropped, he dropped but good (i.e., way below -10).


At that moment, incapacitated or not, Dave seized control of the Skull.
Unfortunately for him, Plum was left to rot when the rest of the party beat feet out of the death trap.  Sam's wizard, Derbish, was next in line and he now possesses the Skull once again. What a night.

Rappan Athuk brought down three more PCs tonight.  We just finished playing a half-hour or so ago.  It was a rough one.  The PCs went down the well, which was warned against from the start.  That being said, come on, when you tell anyone "don't do that" it only entices them more. I'm amazed they held out this long.

What is particularly rough about tonight's game is that two of the three PCs to drop had been around for a while.  Plum Blossom (Dave the Knave's monk/rogue) and Jocelyn (Jim's ranger) had been kicking around in the game for three years or more.  The third, Bonnie's cleric/fighter/hunter of the dead, had been around for quite some time as well.

Despite this, it was a hell of a night of play.  The party put up a valiant fight and did what they could.  They cut their losses and bailed, but only at the last moment. More than that, it was a fun night. As bloody as it was, the players were laughing and carrying on just like any other session. The usual dick and fart jokes abounded.

I commend my players. I know this loss stung.  Jim, Dave, and Bonnie put in a lot of hours in getting those PCs to their current levels.  But did they gripe and moan?  Nope. My group is awesome. They really are.
1 comment:
Email ThisBlogThis!Share to TwitterShare to FacebookShare to Pinterest
Labels: Bonnie, camaraderie, campaign, Dave the Knave, Dungeons and Dragons, Grim Jim, rappan athuk, RPG

Paizo sale coming up at Deniath

In case anyone is interested, Deniath is having a sale on Paizo books on 2/8/11. I still have invitations, so if you're interested, hit me up at thebitterfrost a.t. gmail d.o.t. com

They don't reveal quite what the sale is going to be, but looks like the core rule books.
No comments:
Email ThisBlogThis!Share to TwitterShare to FacebookShare to Pinterest
Labels: gaming deal, Pathfinder, RPG
Newer Posts Older Posts Home
Subscribe to: Posts (Atom)