Con on the Cob giving out a Free Hotel Room

According to its Facebook page, Con on the Cob is giving a way one free hotel room to one lucky person who registers by May 1st.

I have never been to this convention, but have heard it's a blast.
2 comments:
Email ThisBlogThis!Share to TwitterShare to FacebookShare to Pinterest
Labels: contest, Gaming Convention, RPG

One Dungeon Generator to Rule Them All

Yesterday Dyson Logos and Mike from Gutter Cult pointed out what is perhaps the end-all-be-all of the online dungeon generators: Dave's Mapper.

It uses geomorphs from a ton of sites (see here) and let's you pick and choose those you want to include in the generation.  It also includes options for city or village generation.  Very cool.

They *only* thing I see some of the other ones I posted having over this one is that they provide monsters, traps, etc. However, if you just want a spiffy looking map to populate, Dave's is the place.

On a side note, thanks to Kevin for sharing his Random City Intersection generator.  That could be handy for modern/super campaigns.
1 comment:
Email ThisBlogThis!Share to TwitterShare to FacebookShare to Pinterest
Labels: Dungeon Mastery, Dungeons and Dragons, generator, Old School, OSR, RPG, Tools

I've been collecting random dungeon generators for a while now.  The funny thing is that although I love them, I never use 'em.  Guess that is because I've been running a published module for so long.  Anyhow, although some of these have stats for particular versions of D&D, they really are suitable for whatever version you play.  Enjoy.

Donjon's Random Dungeon Generator - Pretty neat in that it provides monster stat blocks, a dungeon map, etc. Tons of options, such as map style, layout, etc.  It even generates a wandering monster table. The link there is for the d20 version, but there is a 4e one at that page too.

Myth Weaver's Dungeon Generator - Lots of options here and it populates the dungeon with monsters and treasure as well. Some times it dishes out d20 stats for specific creatures. It provides stats for the traps, too.

Gozzy's Dungeon Map Creator - This one only makes a map (which might be a plus for some). Plus it includes a random room map creator as well.

Paratime Design's Maps - This page doesn't have a generator, but does have tons of free maps for castles, dungeons, buildings, cities, etc.  Pretty sweet.

Dyson's Random Morph Map - One of my favorites as the maps created look sort of hand-drawn. It puts together the map based on geomorphs from the A Character for Every Game blog.   This guy made a cube out of it.

Risus Monkey's Random Map - This one is very similar to Dyson's (and the site notes it was inspired by it). Again, I like the feel of these maps because they are based on geomorphs and the result looks hand-drawn.  Troll and Flame created an interesting Dungeon Geomorph Cube Project based on this site.

Dizzy Dragon Games Adventure Generator - This one generates a populated dungeon level and encounters based on d20 Pathfinder, Moldvay/Cook/BX, or Moldvay Basic (although it doesn't create stat blocks). The dressings can come from the 1st edition DMG.

The Wizards of the Coast Random Dungeon Generator - This one is pretty great for d20 (I'm not sure if there is a free 4e one out there from WotC). You can select which monster sources (e.g., just the core books, or add in the other Monster Manuals, Fiend Folio, etc.).  It even provides boxed text, if you are into that kind of thing. 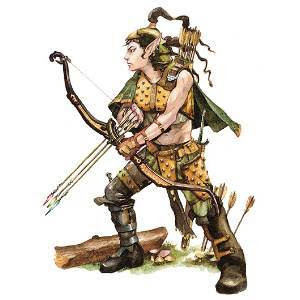 Continuing along with Honoring Dead PCs, (after an overly long delay) here is Grim Jim's Ranger/Horizon Walker, Jocelyn Dawnseeker. (For those who don't play D&D 3.5, a Horizon Walker is sort of an ultra-ranger-like prestige class. It allowed Jocelyn to specialize in various terrains and environments (such as "underground").

Unlike most (if not all) of the other PCs in the Rappan Athuk campaign, Jim's character actually had a background:

Jocelyn is searching for a childhood friend Templeton (who is dead in Rappan Athuk).

Templeton was Jim's first PC in the campaign. I don't mind that the other players didn't bother with backgrounds. We play a beer & pretzels game and the death rate is rather high (sort of sucks to make up an elaborate background only to have your PC snuffed out the next session).  Still, it was a nice touch for Jim to do this.

Horizon Walker: Dark Vision 60';  +1 to hit & damage against creatures with Underground as their terrain location.

Like I said, the Troll Lords have sales all the time these days. This one was too good not to share:
Castles & Crusades Players Handbook PDF for $5.00