Board games that I play with my kids that don't require heavy drinking to get through.


Although I have managed to get in one RPG session with my girls, by and large, we mainly play board games.  If you're like me and have had enough of Candyland and Monopoly Jr., give these a try.  These games are simple enough for younger players, but enjoyable for adults as well. In other words, I can play these with my kids without falling asleep.  At the time of this posting, my oldest daughter (Chaos) is 8 and my youngest daughter (Mayhem) is 4.

Seven Dragons: A domino-like, color matching card game with Larry Elmore art. Link seven dragons of your color and you win. The instructions include several variations of play, including a pre-school rule set (although, after a few games of that, your kids will likely be ready for the full rule set). The advanced game includes use of cards for messing with other players. 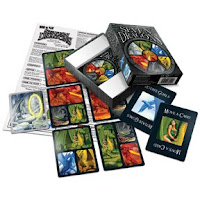 Labyrinth: Players shift the tiles of the maze on their turn, trying to create paths to treasure designated by a deck of cards.  Simple to understand, lots of fun to play. 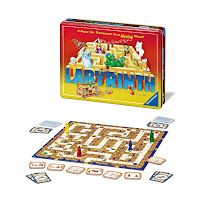 Castle Keep: Each player tries to construct his own keep with tiles that connect based on color or shape. Instead of building your own keep, you can also destroy part of an opponent's keep by playing a corresponding tile on it.

Forbidden Island: A bit trickier than the others, but it is a cooperative game so it is easy to help the kids. After a game or two, they'll have it down.  Players work together to swipe artifacts from the island before it sinks.  You can also scale the difficulty if it gets too easy. 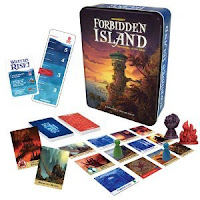 Cave Troll: Each player commands a small band of adventurers trying to gain control of a dungeon. The mechanic is very simple: each room is worth a particular gold value and the person with the most pieces in the room owns the room when it is counted. (Note: I actually own the 2nd Edition which, apparently is hard to find going by the price.  Funny enough, I got it on the cheap during a Fantasy Flight holiday sale). 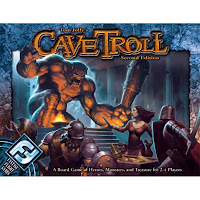 Tsuro: Each player plays tiles trying to keep their token on a path that keeps it on the board, while trying to steer others off.  Teaches ruthlessness. You got to love it. 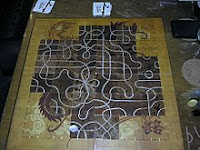 Oshi: A chess/checkers kind of game in which you must push all your opponents pieces off the board.  The more tiers a piece has, the more spaces it came move and the more pieces if can push. E.g., a 3 tier piece can move 3 spaces and push up to 3 pieces. Really fun game. 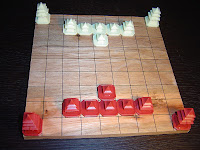 Fireball Island: (Amazon link there).  You must grab the gem and get off the island first!  Use of cards to screw over the other players and boost your own play keeps this from being a simple "roll and move" game. I've had this since I was a kid.  A bit pricey nowadays. 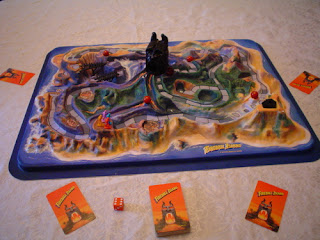 Heroica: Probably the best way to relate the whole dungeon-exploration concept to kids.  Lots of fun little parts and sort of includes campaign play.  I have to admit, though, the bloom is coming off the rose on this one for me because it is more or less a roll and move game. However, there is a rule that allows a player to control the monsters... that might kick it up a notch. 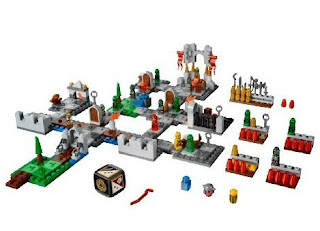 The Classic Dungeon: Actually, although I used to love this game as a kid, I no longer care for it much. "I move 5 spaces.  I attack the monster. Rinse. Repeat." Still, nostalgia gets this one some points and if you are going to play a roll and move game, might as well play one with purple worms, liches, and ghouls. It will be interesting to see if Wizards of the Coast improves it all when they re-release it. 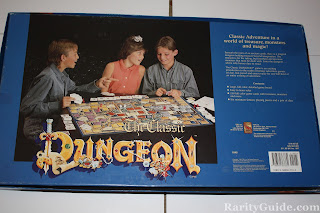 Battleground: Crossbows and Catapults: Toys R Us sold these sets dirt cheap a few Christmases back. Now they cost a fortune on eBay, etc.  This version is a revamped take on the classic, with Orcs and Knights instead of Barbarians and Vikings. I haven't tried to use the actual Battleground rules for it yet which are suppose to be pretty decent and more like a war game.  Right now, we just set 'em up and see who can knock down the most figures. 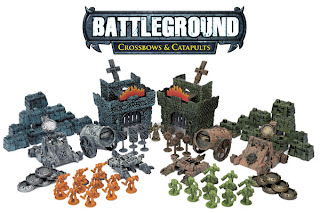 Marc Simonetti did this for a GM screen for a yet-to-released Cubicle 7 RPG called "Yggdrasil."

I was in the local Dollar General store this morning and noticed a pack of 25 pirate figures for $1.00.  They are the same scale as your standard green army men.  Also, they are called BUCCANEER BRAWLERS, so what is not to like? 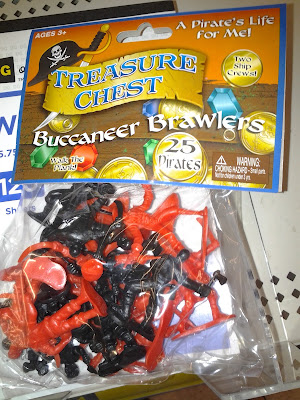 No comments:
Email ThisBlogThis!Share to TwitterShare to FacebookShare to Pinterest
Labels: Cheap Miniatures, Gaming on the Cheap, miniatures, RPG 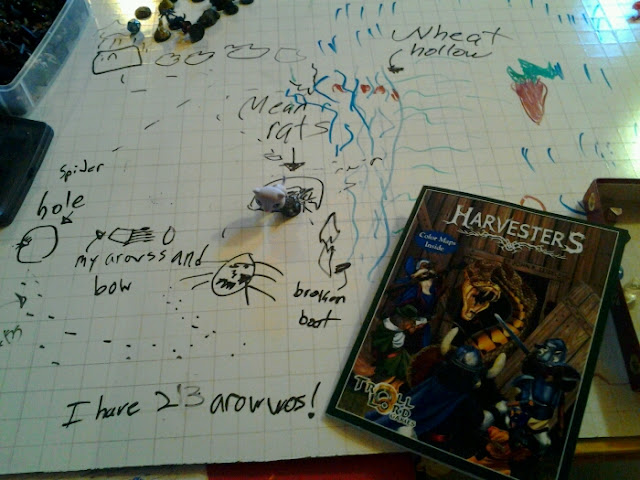 I finally played an RPG with my girls! Since both of them (particularly, the oldest) are fans of Mouseguard, Redwall, etc., we played Harvesters.  Harvesters is Castles & Crusades re-skinned with an anthropomorphic take.

Here are some highlights: 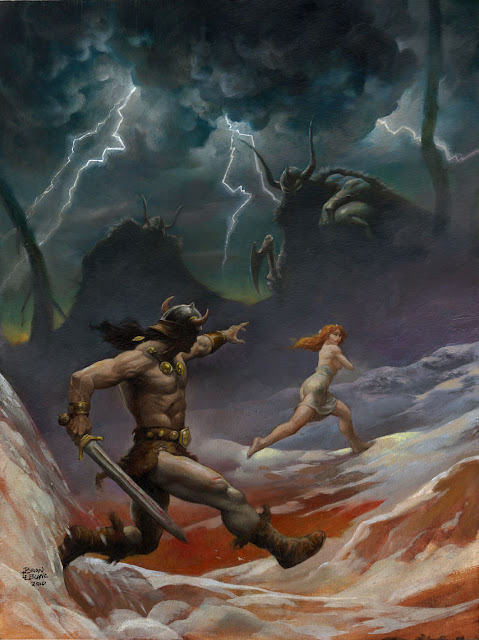