A few years back, this fellow named Theron over at ENWorld posted his customized, "D&D Metal" Pandora station. I've been rocking to it off and on ever since.  I give you...

Just learned of this band, Cauldron Born, from the Black Gate magazine blog. ... and, yes, by this axe, I do rule:

Videos from the Showdown in the Upper Temple of Orcus

I've been really slacking on posting campaign updates. I hope to do so in depth at some point, but just to catch you up to speed: the party finally finished the Showdown in the Upper Temple of Orcus, explored the dungeon a bit more, and, yes, decided to go down the infamous well (they are still exploring down there).

Back when we first started the Showdown, Rob took a view videos.  I figured I might as well share them.  They aren't the most action packed, and dear lord, do I sound like a tool, but, hey, what the hell?  The party had just entered the temple via a magical secret backdoor.  Dave's Roxxxor the Chaotic Awesome half-orge barbarian was still alive and had taken the platform above the lava.  You can hear his theme music in the background.  For those of you playing along at home, he bit it in the next session, being pushed into said lava.

The videos start with the party wizard, played by Sam, fireballing some priests of Orcus and their thug guards.  I'm rolling their saves, saying "ash" for those that were incinerated.  I think Sam is the one simulating the screams of the burning priests.  Oh, and you can hear me bemoaning the players working the neutral alignment loophole to the bone (i.e., they avoid a lot of penalties in Rappan Athuk because they aren't goodly aligned). Yeah, hot D&D action at its finest.  Suffice it to say, D&D is much more fun to play than watch.

Oh, I tend to swear a lot when I DM, so be warned.

Just an FYI, Troll Lord Games, makers of Castles & Crusades, have all their PDFs on sale at RPGNow/DriveThruRPG.  The sale lasts until February 3rd:  LINK

Even if you're not a C&C player, it's worth checking out.  A lot of their stuff is usable with just about any fantasy RPG, especially your various old school retro-clones.
No comments:
Email ThisBlogThis!Share to TwitterShare to FacebookShare to Pinterest
Labels: Castles and Crusades, gaming deal, Old School, OSR, RPG, Troll Lord Games

Tonight, my group has its first session of 2011 and I'm stoked.  Last session, the party decided to go down the well.  Those of you familiar with Rappan Athuk know that this will be a hell of a way to kick off 2010... perhaps with a new bunch of characters.... [evil DM laughter]
2 comments:
Email ThisBlogThis!Share to TwitterShare to FacebookShare to Pinterest
Labels: campaign, music, rappan athuk, RPG

30 Things Overheard in a Tavern 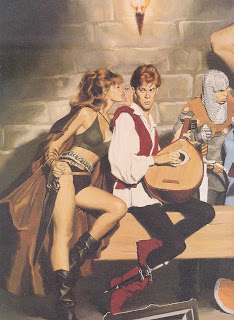 In an effort to put out some usable content, I figure I’ll give the d30 some love. Yeah, I know, the d12 is the true red-headed step child of the dice world, but Al at Beyond the Black Gate has a lock on that die already.  Besides, we all know how fun the d30 can be....

The next time your party is in a tavern or inn looking for adventure and you're drawing a blank, give your d30 a roll and see what you get.  Hopefully it will serve as an adventure hook or at least a mild chuckle.  (I've opted to provide names for people and places because that is the stuff I myself tend to need to make up on the fly. Adjust to taste.)
﻿﻿﻿﻿﻿
﻿﻿﻿﻿﻿﻿
﻿﻿﻿﻿﻿﻿

DriveThruRPG has a Sale Going On

Tome of Horrors Returns with a Vengence

Bill Webb of Frog God Games just announced that they are re-releasing their famous (well, Necromancer Games' famous) Tome of Horrors I, II, and III in one major tome to be called Tome of Horrors Complete: link  Perhaps the most interesting bit is that FGG is continuing its double-barrelled approach and releasing both a Pathfinder and a Swords & Wizardry version.

As a Castles & Crusades fan who owns the original 3.0/3.5 books, I'm not sure I'll have much need for these (I can as easily convert the 3.x stats as I could the S&W stats).  However, this is cool nonetheless.
1 comment:
Email ThisBlogThis!Share to TwitterShare to FacebookShare to Pinterest
Labels: Bill Webb, Castles and Crusades, Frog God Games, necromancer games, Old School, OSR, RPG, Swords and Wizardry, Tsathogga
Newer Posts Older Posts Home
Subscribe to: Posts (Atom)