Review: The Teratic Tome - A Book of Horrors 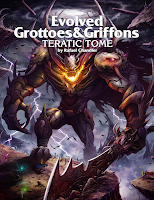 (This review is also posted at RPG.net.  A 20-page preview is available here: link.)

Rafael Chandler hooked me up with a copy of his new monster book, the Teratic Tome (TT) and asked me to take a gander. In short: it’s excellent.

You can pick it up the PDF at DriveThruRPG/RPGNow for $6.66 (nice price) or as hardback at Lulu for $26.66. I have the PDF, but the hardback looks fantastic (more about that below).

Listed as an “OSRIC-compatible bestiary,” it is useable with any old-school D&D edit or D&D variant.

TT appears to be part of a product line called Evolved Grottoes & Griffins. At least I hope it’s going to turn into a product line, because TT is great.

There are several things that set this book apart from the sea of monster books out there. 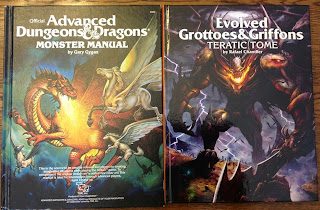 TT is horrific. This is a book full of monsters. These aren’t hit point bags meant to be mowed down by the party. These baddies will make your players say, “Ewww.” Its R-rated (at the least), but not in a cheap shock kind of way. These monsters are meant to disturb. 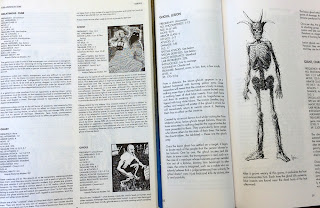 The interior artwork isn’t censored, so don’t leave this book out where kids can reach.

Here are a couple of examples:

The remnant “looks like a humanoid scuttling about on all fours, except that it has four arms and no legs. Stranger still, each of its four arms ends in a bloody stump.”

The nethasq is a humanoid female that “sports a glistening mass of foot-long tentacles that end in barbs and hooks” where its genitals should be. It “haunts places where women have been defiled” and “[w]hen a man enters a place that the monster has claimed for its own, he begins to seep blood from his mouth, anus, and urethra.”

The monster entries hint at a setting or world or whatever you want to call it. This is like the original Monster Manual and Monster Manual II. Remember how the MM told you about how Orcus and Demogorgon hated each other? Well, in TT, you have the Demon Queen Abyzou plotting against Beleth, the Locust Perfect. Or, we learn that the agonists were “[c]reated in a rare moment of collaboration between High Devil Ahriman and the Demon Queen Abyzou” and that the “demons of Ghorom (216th layer of the Abyss) are chaotic evil monstrosities who feed on weakness and decency.” 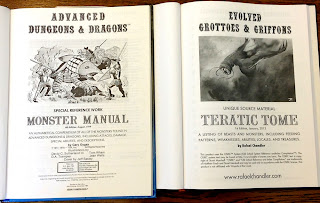 The details are not distracting or over the top. They provide just enough to give the reader a sense of depth and motivation.

The monsters in the TT have motivations that are unique to say the least.

The altar beast, a “towering, wormlike entity with rubbery mauve skin that scrapes off as it undulates across the ground,” was created by a forgotten god of matrimony. What does that mean? That means it “preys upon those who dissolve sacred bonds of marriage. This can include spouses, clerics, priests, nobles, and anyone who participates in the annulment of marriage.”

As one can see, these are specific motivations. At first, I wasn’t sure what to make of it. Would I want a monster like that?

But, the more I read, the more adventure ideas came to me. Why are all these priests dying in the city? Because there is an altar beast on the loose. These details might inspire a whole adventure.

Someone on Google+ called TT “the missing monster book for Lamentations of the Flame Princess” and I’d say that is a damn good summary. A lot of the monsters seem like they would be terrorizing a village or secretly being worshiped by the villagers.

And one could still easily ignore these motivations and use the monster without if need be.

Here are some of my favorite aspects of the TT.

The Venerable Dragons: These ten dragons aren’t your old “it's red, it breathes fire; it's blue, it breathes lightning, etc.” Rather, these dragons are each one-of-a-kind and on the level of deities.

When Ke-Sectat Hatath the purple dragon awakens, the sun “burns reds.” He “soars into the city, accompanied by giant insects and flying vermin.” Then there is Makkas-Nephata, who is “preceded by unnatural rains,” such as blood, frogs, snake venom, and bile.

I can see making an epic adventure to stop the awakening on these dragons or working them into the background of a setting to explain why a region was laid to waste.

There are a few things that are, well, just odd about TT. I dug them, but they’re worth pointing out.

Halflings are Crazy SOBs. The halfling culture alluded to in TT is just nutty evil. For example the Tenebrous Halflings created creatures known as “audiences.” “When several of the Tenebrous Halflings neared death, they would perform a necromantic ritual that transferred their souls into a monstrous body that had been stitched together by their chirurgeons. Within this new body, a floating sack of flesh adorned with tentacles, each audience was a collection of diverse personalities.”

Not sure there are too many “floating sacks of flesh” floating around your standard halfling shire.

I dig the different take, but your mileage may vary.

Lots of Tentacles. I like me some Cthulhu-esque monsters as much as the next guy, but, boy howdy, you are going to find a lot of tentacles in this book.

Lots of Tentacles Where Genitals Should Be. Self-explanatory.

Monsters Have Smells. When I took writing classes many moons ago, I was told that one of the most under-described senses was smell. This seems to have been taken to heart here, as just about every entry mentions how the monster smells. And this isn’t the same ol’ “smells like rotting death and/or feces” you usually get. For example, the infiltrator “is a pink-skinned humanoid with lavender tentacles and a red-lipped circular maw in its chest” that “smells of fresh-peeled orange rind.”

I like this touch, even if it came across as a bit forced at times.

If you want traditional humanoids, dragons, ogres, etc., you probably won’t care for TT.
If you’re looking for horror-inspired, demonic monstrosities to make your players gag, this is the book for you.
No comments:
Email ThisBlogThis!Share to TwitterShare to FacebookShare to Pinterest
Labels: 1st edition, monster, Old School, OSR, pdf, Reviews, RPG

A couple years back I wrote a good bit about Tact-Tiles and alternatives (see here, here, and here).

Like Hulks & Horrors, Arcana Rising pushes an old-school style rule set and game style (i.e., dungeon crawling) into a new setting.  So, I think this is more of modern-day dungeon crawling than, say, a Shadowrun-type game.

He has a pretty reasonable target for his Kickstarter, so take a gander.

Hulks & Horrors is back... and FREE

Although the Kickstarter didn't succeed, +John Berry pressed on and made the game anyhow!

You can pick up the PDF for free now: link 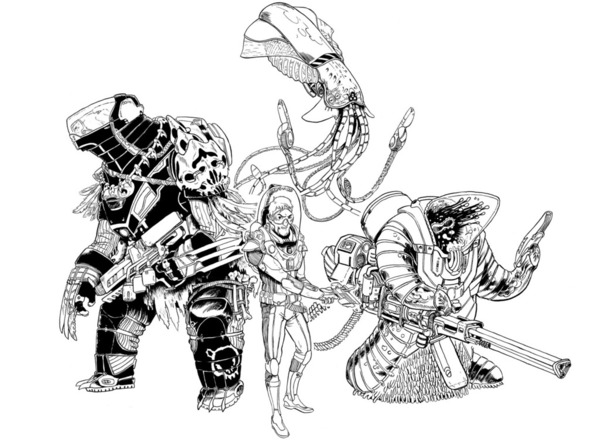