It was a rough weekend.  Chaos's guinea pig, Pepper, passed away on Saturday.  We discovered him Saturday morning nearly motionless and with a severe case of diarrhea.  A quick Google search revealed that this is a pretty serious condition for a guinea pig.  Once those little guys dehydrate like that, everything inside them starts shutting down.  We found a vet that saw small animals as quickly as we could, but it was a half-hour drive away.  I had a bad feeling that he wasn't going to make it that long and, unfortunately, I was right.

This would have been tough normally, but it was particularly rough because Mrs. Frost and I just gave our daughters the guinea pigs for Christmas (Mayhem's little guy, Henry, seems to be doing fine). We've had other pets, but this was Chaos's first.  It was her pet and no one else's. She loved that little guy. 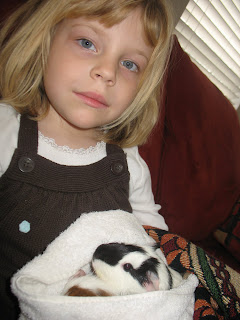