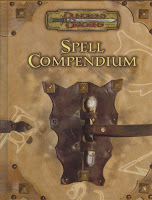 is seeing more and more use in my Rappan Athuk

campaign.  Sam, the wizard player, first introduced it a while back and has had fun with defenestrating sphere, but once the cleric player, Rob, picked up a copy, boy, did it start to shine. He has found plenty of useful anti-undead spells and the anti-incorporeal undead spells haven been particularly handy.  Quite frankly, with the help of those spells, the party worked over the big, bad wizard spectre, Nadroj, like a kobold punk.  Ghost touch armor and ghost touch weapon, with a dash of life's grace, and Mr. I'm Going to Drain Your Levels Dry became Mr. Oh My Lord They Can Smack Me at Will and I Can't Do Shite."

Anyhow, I really don't a real beef with the SC.  It has a great book and I haven't seen any really unbalancing stuff.  RA is plenty hard, so I really don't worry about the players having an advantage.  They were expecting the spectre battle, so Rob had picked his spells appropriately.  He might not have that kind of insight the next time.  Still, methinks it's time for this DM to adjust a few evil clerics spell choices.  The players aren't the only ones with a copy of the book.

On a side note, I always find the addition of new cleric or druid spells odd, role-playing-wise.  A wizard or sorcerer doesn't learn new spells unless they level up or, in the case of a wizard, find a scroll.  It flows sort of normally to see new spells introduced that way.  In the case of a cleric, the player gets a new book and suddenly, since he can choose any class-appropriate spell at rest time, the character knows new spells literally overnight.


An incorporeal undead gets schooled thanks to the SC
Email ThisBlogThis!Share to TwitterShare to FacebookShare to Pinterest
Labels: adventure, campaign, rappan athuk, Reviews, Rob, RPG, Sam